Blog 3 – Can You Have a Decent Career with an Arts Degree?

You are here:
Career Coaching

Can You Have a Decent Career with an Arts Degree?

When I say an Arts degree, I mean a liberal arts degree, rather than a visual arts degree, since many students don’t know the difference. The term liberal arts referred to trivium (grammar, rhetoric, and logic) and quadrivium (arithmetic, music, and astronomy) back in the medieval ages. Regarding current North American universities, liberal arts usually refer to humanities, psychology, sociology, foreign language, etc. Some universities, such as UBC, offer mathematics as an arts degree.

Parents can be anxious when their kids decide to continue with a liberal arts degree in universities since such a degree means a suboptimal choice. Students usually choose arts as their backup plans when they can’t get into commerce, engineering, or science. If one student has a History major as her undergraduate, parents will offer their commiseration and say, “what can you do with that degree!”

Parents’ misconception and bias towards arts degrees are not evidenceless since STEM is commonly considered today’s hottest majors. When it comes to career utility, liberal arts studies often get a bad reputation. However, liberal arts can also be a practical and rewarding choice for students, especially those who don’t have strong math or science skills.

Before digging into why liberal arts degrees are valuable in the job market, let’s look at some of the most valuable skills appreciated by employees. Udemy ranked communication, creativity, and critical thinking among the top 10 in-demand soft skills in its 2020 Workplace Learning Trends Report. Other top skills include teamwork, problem-solving, and leadership.

While STEM majors greatly emphasize hard skills, liberal arts degrees help students master in-demand soft skills, which usually take longer to develop. And more importantly, all these soft skills are highly transferable, meaning such skills are relevant across disciplines and industries. Transferable skills are the most critical when applying for a job, especially when one wants a career change. According to the report “Liberal Arts Graduates and Employment – Setting the Record Straight” by the Association of American Colleges and Universities, “the skills gained from a liberal arts education consistently rank among the most in-demand skills for the future” (2014). In addition, according to Dr. Carlton,

“nearly half of executives think workers need more soft skills, like critical thinking and communication. While an employer can teach hard skills, it’s much more difficult to train someone in soft skills.” (Writers, 2021)

Let’s look at some liberal arts graduates who are famous in their industries. Anne Mulcahy is the former CEO of Xerox. She earned a B.A. in journalism and English at Marymount College. U.S. Supreme Court Justice Clarence Thomas graduated from the College of the Holy Cross in Massachusetts cum laude in English literature. The former CEO of Disney, Michael Eisner, never took a single business course, but he did a double major in English and theater at Denison University. Stewart Butterfield, the co-founder of Flickr, studied philosophy at the University of Victoria and the University of Cambridge (Famous People with Liberal Arts Degrees, 2020).

The list goes on forever. My point is not to convince you to let your teen choose a liberal arts degree, but to remind you that success comes in various forms and from many directions. No two pathways are identical, and we must stay open-minded. Please remember,

“93% of employers agree that candidates’ demonstrated capacity to think critically, communicate clearly, and solve complex problems is more important than their undergraduate major.” – Association of American Colleges and Universities, 2014

Clearly, a liberal arts education holds great value in today’s job market. But why students are obsessed with other degrees such as STEM or business? Do the skills you acquire from a liberal arts degree truly make it worth pursuing? 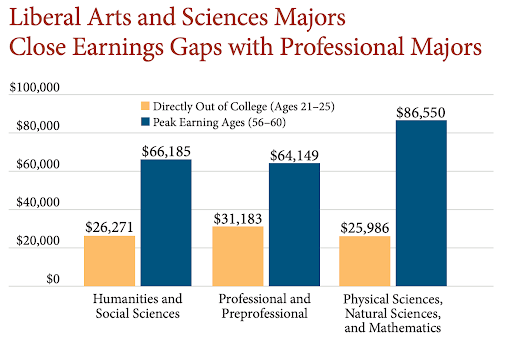 (Association of American Colleges and Universities, 2014)

What Students Must Understand?

For those who are decisive to continue with liberal arts degrees, students should also be aware that, unlike a professional degree that prepares graduates for a specific career path, liberal arts majors must invest in career planning.

Even though such degrees prepare you to succeed in jobs with soft skills, you need to SELL since such skills are much difficult to quantify.

“When people ask, ‘What are you going to do with that liberal arts degree?’ the answer is: ‘Whatever I want,'” said Lynn Pasquerella, president of Mount Holyoke College. “It’s your capacity to see how the skills you acquired can be transferred that’s important.”

Blog 16 – Considering Law School or a Career in Criminal Justice? What Should You Know
April 21, 2022